Forum for University of Warwick students

Any other computer related talk.

With one month remaining until term starts for the 2007/2008 academic year, we need to start thinking about a marketing campaign to let students know about twofo.

I'm thinking that printing off loads of A7 or A8-ish (i.e. 8 or 16 to an A4 page) flyers that can be put in students' pigeon holes, particularly those in Computer Science or Mathematics. Also, the occasional A4 poster dotted around halls?

Who's willing to volunteer a little bit of time to:

Also, astropoint's done a good job updating the wiki, making it more comprehensive and a lot tidier. What else needs to be done to the website so new students can figure out what twofo's all about? Of course, there'll be a nice, big, front page announcement near the start of term, and it will be made clear that this may be against ITS's AUP.

I'll nudge some people on the hub to here tomorrow

Well I split the logo into 9 that can be printed off on one page.

I also did some backs for it with basic instructions for connecting, so if somebody is willing to turn the paper over after printing it should just go on nicely.

I chose the zip version because more people are likely to be able to extract it, rather than coming to uni and simply having no idea what to do about these magic .rar files that let you download films

(Don't ask why one is png and one jpg, I've only just noticed myself and have no clue

I moved stunnel off beeb partly due to reliability issues, partly because i was never comfortable with it being in the same place as the website

I like it very much, astro. If we're having instructions on how to connect on the flyer itself, I'll add some information to the twofo header saying that this might go against the AUP so check before use.

Right. Now we need posters (could just use the ones I've already made) and voluntneers!

Who's still at uni and is willing to help out a bit here?

i think we should volunteer monk for the spamming duties, he has access to the required depts for issuing spam and hes not *too* intimidating so people might like ask him about it and stuff.
I think monk should be dressed up in towncrieresque gear {at monks expense obvv} and left in the market place to hand out the flyers.
Top

I'm up for spamming too, I should be back a bit before term starts.

I'll give designing posters a go too though I can't promise anything.
Top

Well I gave the posters a shot and came up with this: 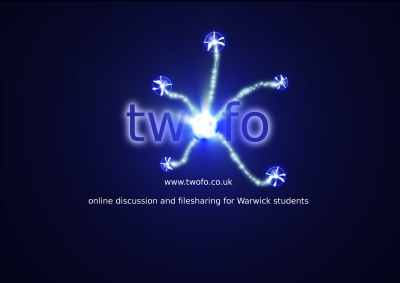 Tell me if theres any way you can think of improving it.
Top

Wow, that looks impressive, I like it! It'd make a wonderful backdrop but for a poster, it'll probably be too difficult and expensive to print. It'd look good if we could pull it off though.

OK. Let's get a plan for where we'll spam. Definitely, we need:

Where else do we want flyers and what else should we do.

Possibly flyers in maths too, given that there are more maths people on the hub than comp sci as a rule

Engineering pidgeon holes are pretty easy to spam too, though as far as I know I'm pretty much the only one on the hub at the moment.
Top

ooo I really like that new poster.. looks very nice.. but yes as Cocodude says, probably a bit more expensive to print.
Top

so this was last years thread, but i'm guessing it'll be the same kind of thing this year.

just let me point out that the instructions are wrong...


probably best not to include the link, because all the n00bs will think that stunnel is dc++.

Whoops, the perils of copy and paste there

I would like to point out I had updated that since we changed servers or something, sop when the flyers went out last year it was correct

And in an hour or so I'll have gotten around to fixing that too.

I would like to point out I had updated that since we changed servers or something, sop when the flyers went out last year it was correct

And in an hour or so I'll have gotten around to fixing that too.

it amuses me that even after edits, one is png and one is jpg

Users browsing this forum: No registered users and 7 guests